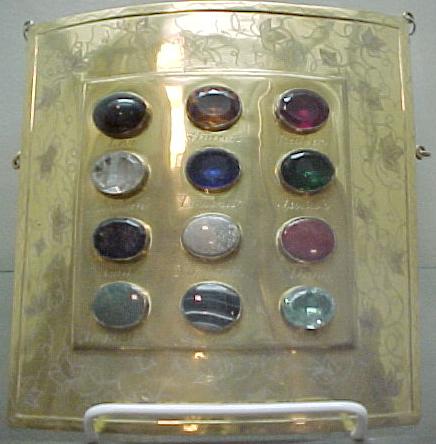 
Please do not make the error of thinking I am setting up the study of the Ephod as though the Ephod itself were something we are to worship. Like anything else in scripture mainly from a historical viewpoint there is spiritual truth. These things are but types and shadows to truths the Lord would have us apply to our understanding. We do not literally go about wearing physical Ephod's which would somehow give us a display of spirit that would be the envy of everyone else. This study is very difinitive as are all the studies I have made of the scriptures and they are most necessary to understanding our present walk.

Therefore let no one sit in judgment on you in matters of food and drink, or with regard to a feast day or a New Moon or a Sabbath.
Such [things] are only the shadow of things that are to come, and they have only a symbolic value. But the reality (the substance, the solid fact of what is foreshadowed, the body of it) belongs to Christ. Let no one defraud you by acting as an umpire and declaring you unworthy and disqualifying you for the prize, insisting on self-abasement and worship of angels, taking his stand on visions [he claims] he has seen, vainly puffed up by his sensuous notions and inflated by his unspiritual thoughts and fleshly conceit, And not holding fast to the Head, from Whom the entire body, supplied and knit together by means of its joints and ligaments, grows with a growth that is from God. If then you have died with Christ to material ways of looking at things and have escaped from the world's crude and elemental notions and teachings of externalism, why do you live as if you still belong to the world? [Why do you submit to rules and regulations?--such as] Do not handle [this], Do not taste [that], Do not even touch [them], Referring to things all of which perish with being used. To do this is to follow human precepts and doctrines. [Isa. 29:13.] Such [practices] have indeed the outward appearance [that popularly passes] for wisdom, in promoting self-imposed rigor of devotion and delight in self-humiliation and severity of discipline of the body, but they are of no value in checking the indulgence of the flesh (the lower nature). [Instead, they do not honor God but serve only to indulge the flesh.]
Colossians 2: 16 -23 AMPLIFIED

The Lord does not do away with the types and shadows in scripture. He uses them to illustrate to our understanding the things we walk in day by day.

We are told that we will find the Lord if we seek Him with all our hearts. Jeremiah 29:13.
I only share out of the experience the Lord has given me over these many years.

I want to tell you all the story of TWO Jesus's that appeared to me in a vision. This vision happened in early 1990 when I was delivered out of New Age Deception. For a time, the Lord had ordered the enemy of my soul to take me away into deception. (Please see my testimony on this HERE.)My carnal mind loved the accalaides of men at that time and the spiritual pride I manifested was horrible. The calling upon my life to be an overcomer and to show forth the Love of God was very real, but tainted due to the pride in my life and the ego I displayed with that very same pride. So God Himself ordered Satan to take me for a time. And that is exactly what Satan has the right to do when God says so. He is after all the serpent from Eden which eats the dust of the earth. That's our flesh.

My point in this story is to show you the difference between the true Ephod which a High Priest of the Lord would wear, and the false Ephod which is worn by Lucifer - man in his fallen sinful condition. If we take this study to our hearts, it will deliver us from false idols we may have set up there!

The time came when I repented of personal pride and ego and of the false steps I was taking in the spirit. This was a very stressful time and the spiritual entities which I discarded by "refusal" in my life were very real. These entities had entered into my life with my permission when there was found in me this pride which gave them all "footing" by which they deceived me. For many years afterwards my life became the target of attack by these forces of the armies of darkness to attempt to thwart my forward progress in God and my ability to lay down all my own will as a sacrifice to the Lord. My refusal of their workings in my life caused me immense suffering. If you saw me in the realm of spirit at that time, you would see I had on the Armor of Ephesians 6:11, but that I was being attacked from all sides as though I stood in the middle of a field of battle.

I had worn the Ephod during my deception that Lucifer had willingly given to me. This Ephod which lacked the three stones. In the deliverance phase of my experience, I had to exchange the Ephod of Lucifer for the true Ephod of the High Priest with all 12 stones fully intact and working in my life. In the realm of spirit, if you were to see me with "spiritual eyes", you would have seen me wearing (at last) the true Ephod.

But during the deliverance phase of this experience I had to come to a realization of what true "Humility" really means.

Christ Jesus, who is at the right hand of God in the Throne Room of Eternity is HUMBLE. He is not infected with the human taint of pride and the religious taint of spiritual pride. He is given a name above every name by God who had raised Him from the dead. However, this true Jesus who is exalted by God above all other things is abiding quietly even with the most cast off person in society, the broken, the hurting, the poor and needy, those who do not fit into this world's mold for a proper life. Jesus relates to those who are not able to fend for themselves in this world and He holds them there in His tender love. When someone releases their life into His hands, He holds them there to His bosom, even though the rest of the world cannot perceive that.

When I came out of this deception, I had a vision as I lay on my face on the floor in repentance.

There before me standing ever so glorious was The Lord Jesus Christ.
I beheld Him. He was wearing a white garment down to His ankles, very simple of woven work, and He had accross His chest a Purple Robe which enveloped His torso. His face was as brilliant as a thousand suns in glory. His hair was white as wool. Revelation 1:13-16. He had on a Golden waist band. His robes were billowing in a wind. I could see clearly His nail scarred hands and feet which were shod with a sandal. Never before had I seen such a one as the Lord in His Glory.

Then after a time a 2nd Jesus appeared beside this 1st Jesus. Now I saw 2 Jesus's standing in front of me in this vision.

The 2nd Jesus was also breathtakingly glorious in this vision. He was exactly and percisely the very same as the 1st Jesus beside Him.

I saw the eyes of one Jesus, black, strong, bold, but I could not see the eyes of the other Jesus. His head was bowed down, He was weeping in total brokeness and in total grief and sorrow as though He bore the weight of the World and Humanity upon Himself. He suffered immeasurable greif and sorrow. Not once did I see His eyes as He was so bowed with the weight and burden of mankind and of my own position and the amount of immature discernment I had.

What I was seeing was Lucifer, looking exactly like the Lord, and the Lord Himself who was perfect in Humility and in Holiness. The Lucifer image of the Christ stood in harmony with PRIDE. The true Jesus never exalted Himself at all.

Then I heard a voice over these two Jesus's. "Choose you this day whom ye will serve."
So it was that I had to choose which Jesus I would serve.

The strong one on the left who was so powerful and mighty, or the one on the right who was humble and broken.

I chose the one on the right, and the one on the left faded away out of sight.
The broken Jesus, the one who was burdened with immeasurable greif and sorrow, that was the one I chose.